A Final Assembly Line (FAL) in the US to support customers of the C Series moved rapidly up the agenda last week as Airbus and Canadian manufacturer Bombardier announced their partnership is to become effective from 1 July, earlier than planned. 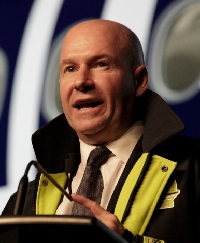 The deal, likely to be a major talking point at this year’s Farnborough from 16-22 July and under which Airbus will acquire a majority stake in the C Series Aircraft Limited Partnership (CSALP), was announced initially last October (BTN 23 October 2017).

A joint statement said the partnership, based in Mirabel, Québec, would benefit from Airbus’ “global reach, scale, procurement organisation and expertise” in selling, marketing and producing the C Series family.

Aimed at the 100 to 150-seat market, the single-aisle aircraft last year won a major order from Delta Air Lines, challenged by Boeing on the grounds of what it alleged were unfair subsidies and initially blocked then passed by the US government.  An FAL in the US, based in Alabama, is now expected to go ahead, dedicated to supplying US-based customers.