An Airbus A321 in special livery took its place in airline history last week as it became the 100th aircraft to join the fleet at fast-growing carrier Wizz Air. The new fuselage design was unveiled at Budapest to mark the occasion.

The airline also announced the creation of the Wizz Air Foundation as what it called a reflection of the ever-increasing importance of the airline to the communities it serves, to focus on the areas of health, education, childcare and emergency aid.

The Wizz Air fleet has reached 100 just 14 years after the start of operations, during which time it has carried more than 155m passengers. The company says it will continue to develop its network and “stimulate under-served markets” in its ambition to become one of Europe’s top five airlines.

Future growth plans are underpinned by committed orders for a further 268 latest-technology aircraft for delivery until the end of 2026, bringing the fleet to almost 300 aircraft, supported by a team of 10,000 colleagues.

CEO József Váradi says a strong focus on digitalisation will at the same time enable Wizz Air to become “even more customer-focused as well as introduce further efficiencies into the business”. 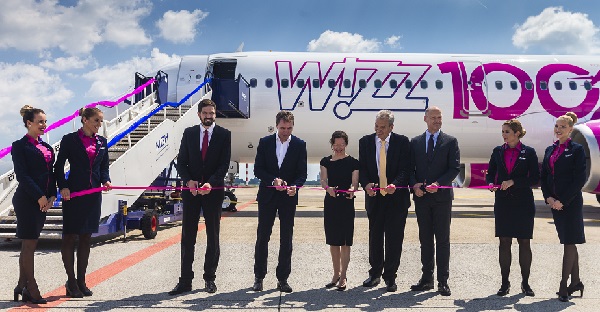