Cathay Pacific Airlines was the star of the show in Dublin last week as officials laid on an official welcome for the carrier’s new four-times-weekly direct service to Hong Kong, which began on Saturday.

The year-round flights form Dublin Airport’s first direct route to the Asia-Pacific region, with airport managing director Vincent Harrison describing the occasion as a major milestone for the airport and the entire Irish economy.

Hong Kong-based Cathay is operating the new service with an Airbus A350-900 in a three-class configuration on Mondays, Wednesdays, Thursdays and Saturdays.

Harrison said: “Trade between Ireland and China is worth more than €8bn a year and almost 100 Irish firms have operations in China, employing 100,000 people there.

“With an estimated 4,000 Irish population in Hong Kong and about 40,000 people a year travelling between our two cities I have no doubt this new route will be especially popular for business travellers.”

Cathay general manager Europe James Ginns added: “We’re delighted Ireland’s first and only non-stop flight to Hong Kong has been so well received and thrilled to have a role in fostering economic growth between Ireland and Asia.” 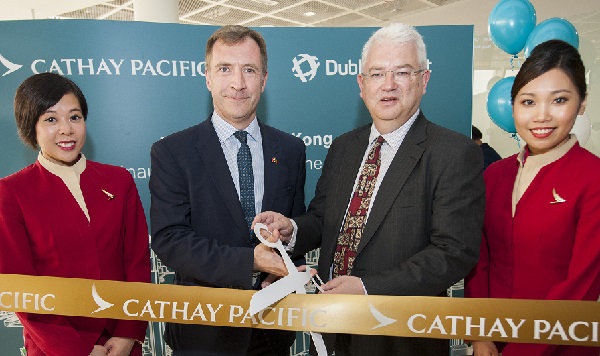