In what it called a “boarding call for exporters”, Heathrow last week welcomed the arrival of two new direct services to Chinese cities – while warning competing European hub airports were still flying to 10 more Chinese destinations.

Both new destinations, Wuhan and Sanya, are being served by China Southern Airlines and are firsts for direct routes into Heathrow, while the connection to Sanya is a first for Europe.

The routes allow for more than 6,000 metric tonnes of additional cargo capacity and 110,000 new seats for passengers, but officials noted capacity constraints mean European hubs continue to have a competitive advantage in connecting to China (see graphic below).

China Southern last week launched three new weekly services between Heathrow and Wuhan, a mega-city referred to as the “Chicago of China”, and will begin two weekly scheduled services to Sanya on the island of Hainan on 12 July.

In a further plea to be allowed to expand, Heathrow said: “Connections to Chinese cities are clearly valuable to the UK (but) rival EU hub airports with capacity to connect directly to 10 other Chinese destinations are facilitating more trade and investment to their countries.” 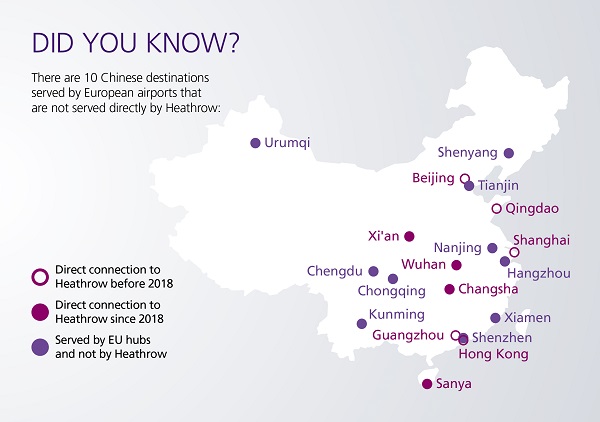 BA flew Chengdu for 3 years but stopped in January 2017 claiming the route was not viable. The LHR slots are being used for New Orleans flights.