General Sir Peter Cosgrove has been governor general of the Commonwealth of Australia since March 2014. The son of a soldier, he graduated from military college in 1968. He was sent to Malaysia as a lieutenant in the 1st Battalion, Royal Australian Regiment (RAR), and soon after was posted to Vietnam, where he commanded an infantry platoon and was awarded the Military Cross. After several other postings and eventual promotion to general, Sir Peter became chief of the Army and then chief of the Defence Force before his appointment as governor general. This month’s SOAPBOX is taken from his address as he welcomes the 74th IATA AGM to Sydney. 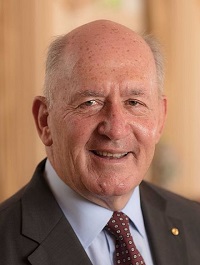 As the IATA AGM opens, over 100,000 flights will take off around the world. Some 100m passengers will travel to new destinations for business, to meet friends and family, to study in another country, for all kinds of reasons. Also, 15,000 tonnes of air cargo worth a staggering $6.4trn will be transported across the globe. And directly or indirectly, 63m people will get up and go to work to make all this possible.

And while this amazing movement of people, goods and services happens, it won’t make the news and people won’t stop in the street and marvel at what is going on in the skies above them. It will be just another day, business and life as usual!

I don’t mention these statistics to inform you. I am sure you are all familiar with them. I mention them to make the point that, although largely taken for granted, international air transport has revolutionised our world.

When we think of inventions that have changed the course of history and human development – the wheel, printing press, steam engine, electricity, and the internet –the airplane flies high among them.

Air travel has transformed the way we live. It brings people and cultures together like never before. It is the wind beneath the wings of globalisation, economic growth, development and opportunity. For all of us, our connectedness, our prosperity and the possibilities of the future owe so much to aviation. And behind all this stand the world’s airlines, the stewards of this revolution, whose duty is to ensure the continued safety, growth, and sustainability of aviation, and ensure its enormous benefits continue for generations to come.

These are great responsibilities. And I know the delegates at IATA have much to consider over the next few days. From priority number one, safety and maintaining the industry’s excellent record, to improving sustainability and the carbon offsets to combat climate change; remaining vigilant against security and terrorist threats; fighting human trafficking; improving infrastructure to match growth and demand; and of course remaining competitive and financially viable – an industry that is not profitable serves no-one’s interests.

These are the things that underpin aviation around the world; the things we must get right in the interests of the millions of people for whom aviation is the key to prosperity and a better quality of life.

Airlines say they are in the ‘business of freedom’, and I do not disagree. It isn’t freedom in the military sense, but it’s freedom nonetheless – freedom of opportunity, of movement, of trade, of fellowship. Freedom to contribute to, and be part of, everything our world has to offer.

This freedom, this aviation revolution, is extraordinary on so many levels. We should stop and marvel at it more often than we do. Today, at IATA’s AGM, we are definitely taking time to do just that.

It is my pleasure to welcome IATA to Australia.