Uncertainty over whether a summit between President Trump and North Korea’s leader Kim Jong-un will take place after all has put talks on air services between North and South Korea back in limbo despite a visit by UN International Civil Aviation Organisation (ICAO) officials earlier this month (BTN 7 May). 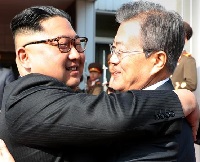 The trend is still toward reconciliation after Kim and his opposite number from South Korea, Moon Jae-in, held a surprise meeting on Saturday, their second in a month, two days after Trump cancelled his summit but then said it might be on again.

Recalling the ICAO visit, Aviation Week reported on Thursday that North Korea was taking steps to improve cooperation with the international aviation community, which could open the way for airlines to resume, or begin, using North Korean airspace.

The agency said it followed an initial request sent to ICAO’s Asia and Pacific regional office by the General Administration of Civil Aviation of North Korea in February, and was supported by the authorities of South Korea.