Daily non-stop flights between Heathrow and Brunei International Airport are being launched on 28 October as a result of national carrier Royal Brunei Airlines dropping its Dubai stopover. 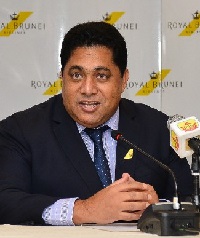 The change will see faster journey times on both the Heathrow – Brunei route, from about 18hr to 14.6hr, and on the connecting service to Melbourne via Brunei, which will come down to around to 23hr instead of 28hr-plus.

CEO Karam Chand said: “The introduction of our non-stop flight between Heathrow and Brunei is a significant milestone as it means Brunei and the UK will be seamlessly connected by a direct air link for the first time.

“Our Dubai stopover has served us well but following increased demand from passengers for a direct connection we have been working toward this goal and are excited to announce its implementation before the busy Christmas period.”

Royal Brunei will deploy a Boeing B787 Dreamliner on the route with more than 1,000 entertainment options.

Country manager UK & Ireland Adiel Mambara noted that with a one-stop flight to Melbourne, the airline was now also poised to become a major player in the UK – Australia market with award-winning service and hospitality and value-for-money fares.