Shake-up on the trains

Although overshadowed by the temporary renationalisation of the East Coast Mainline, to be rebranded as London North Eastern Railway (LNER), last week's major rail story for most travellers was the UK’s biggest shake-up of train services to date elsewhere. This began yesterday, Sunday, as Govia Thameslink Railway (GTR) brought in a major boost to services as part of its RailPlan 20/20 programme. 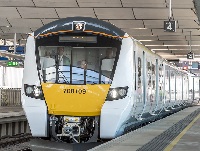 Ahead of that, the government said the East Coast service was to be temporarily renationalised after operators Virgin Stagecoach could no longer meet the promised payments in the £3.3bn contract.

The London-Edinburgh-Inverness service will be taken back into public control on 24 June, three years since Virgin Trains East Coast started running.

At GTR, meanwhile, changes from yesterday herald almost 400, or 13%, more trains running every day. As Britain’s biggest rail operator, GTR will now be running around 3,600 services – one every 24sec – as part of the network-wide programme to boost capacity.

Departures and arrivals have been re-set across the entire GTR network of Southern Railway, Gatwick Express, Thameslink and Great Northern, which together account for almost a quarter of all UK rail journeys and feature several airport links.

Some trains are using different stations, with many King’s Cross London services now calling instead at St Pancras International next door (BTN 14 May), but GTR says passengers will see huge benefits, with space into the capital for an extra 50,000 travellers in the peak.  See also AND FINALLY.

• BTN will be trying the Cambridge via Finsbury Park – Gatwick service shortly.