A diamond anniversary and a national milestone have been putting Ireland in the aviation spotlight as Aer Lingus celebrated 60 years since it began flying across the Atlantic.

The first flight saw a Lockheed L1049 Super Constellation embarking from Dublin and Shannon to New York with a crew of six tending to 99 passengers in Economy Class. Today, Aer Lingus Airbus A330s cross the Atlantic with up to 317 passengers on each flight.

The carrier, which calls itself Ireland’s only 4-star airline, has carried 35m transatlantic passengers over the 60 years, initially to New York and Boston, whereas today it has direct connections from Ireland to 13 North American points.

This summer marks the company’s largest long-haul programme to date, with 2.75m seats across the Atlantic including new direct routes to Philadelphia and Seattle.

In 1958, the flight time from Ireland to New York was about 14hr outbound at a cruising altitude 16,000-18,000ft. Today, the outbound Dublin – New York JFK flight duration has been almost halved to a scheduled 7hr 30min.

The Dublin hub is now a leading European transatlantic gateway, ranking as the fifth largest European airport for connectivity to North America, and offers US Customs and Immigration pre-clearance before take-off. 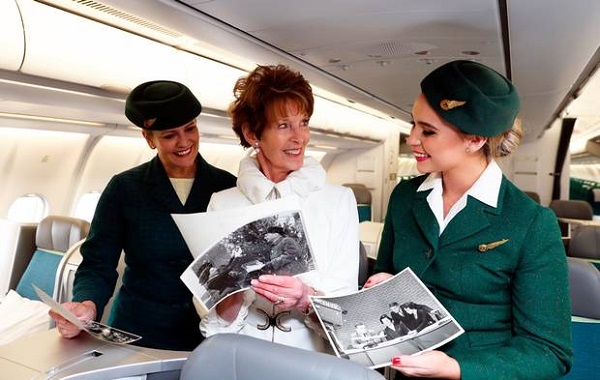