John Miles, best described as a really nice guy, has passed on. Something of a protégé of Graham Hill, he was essentially the development driver during a time in the late 1960s when Lotus was developing both the successful Lotus 72 and the experimental Lotus 63 four-wheel drive effort.

After the death of Jochen Rindt at Monza in 1970, Miles moved on, his place taken by the emerging Emerson Fittipaldi. 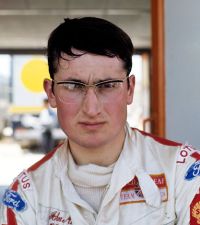 Having won the 1966 Autosport Championship in a Lotus Elan, he subsequently raced the works F3 Lotus 41 and GT 47 during 1967, winning four international F3 events in 1968. This brought him to the attention of Colin Chapman, although the two never really got on, the aggressive Chapman vs the studious Miles. Later they were to work together when Miles honed his skills as a brilliant chassis development engineer.

The son of actor Bernard (Lord) Miles, in 1985 he founded 'Miles Music', a jazz recording company, with Peter Watts. In 1996, their release of the CD Tamburello by Peter King won the BT Jazz CD of the year award. It was inspired by the death of Ayrton Senna.