Long-haul growth is in the air for Malaysia Airlines after the airline issued a Request for Information (RFI) from aircraft manufacturers. Group CEO Izham Ismail said the carrier hoped to place an order by the middle of this year. 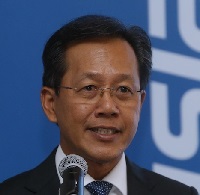 "We have issued an RFI but we have not yet decided on aircraft type yet,” he added. “We are looking for new-generation widebodies and the manufacturers are working with our team to understand what our future network needs are.”

The ex-Air Berlin aircraft will replace six B737-800s that are coming off lease. In all, Ismail said, the airline needs 30 additional new aircraft and replacements over the next decade and by 2028 will have more than 120 in its fleet split 60/40 between narrow- and wide-body.

Under its latest restructuring, Malaysia Airlines cut back its long-haul network to Jeddah, Heathrow and Auckland. Ismail said he would consider reinstating Los Angeles, closed in 2014, and Paris, closed in 2016, once the company returned to profitability.