Last Sunday (1 April 2018), and on the 100th anniversary of the founding of the Royal Air Force, the de Havilland Aircraft Museum was presented with an Engineering Heritage Award by the Institution of Mechanical Engineers for its work in preserving the only surviving WWII de Havilland Mosquito prototype. Its pioneering bonded composite construction is still in use today. 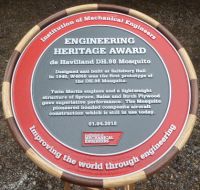 The fast high-flying Mosquito was able for much of WWII to roam almost at will over enemy-occupied territory. Built with wooden components, it was designed for speed and range as a two-seat unarmed light bomber, long-range fighter and reconnaissance aircraft. Its performance derived from a combination of careful packaging, an aerodynamically clean shape, a high wing loading (by pioneering a smaller wing area) and power from two supercharged liquid-cooled V-12 Merlin engines.

The de Havilland Aircraft Museum, Salisbury Hall, London Colney, is very close to J22 M25 in Hertfordshire, and features many de Havilland aircraft from the 1930s, an Air France Comet 1 fuselage with the controversial square windows, and representative major components of all DH aircraft until the final production machine, the DH146. 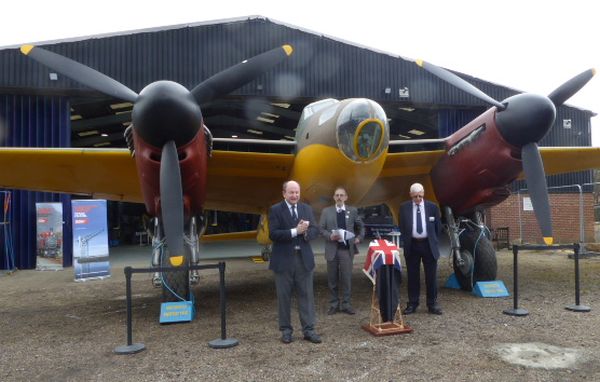 Whilst celebrating 100 years of the RAF, it is perhaps timely to remember that RAF HENDON was closed 50 years ago on 31/3/68 (I obtained my solo gliding wings in the last hour of the last day of operation !. Imagine today the strategic position that Hendon would be in the civilian airline world and meet the needs for the UK South runway capacity constraints rather than housing developments. A good lesson for those in authority reviewing RAF Manston right now !!!!