The timing was inappropriate, with the airline announcing just 48hr later its results for 2017 showing a £48.5m after-tax loss compared with a £187m profit for 2016.

When asked about last year, all Kreeger would say was that the effective devaluing of the pound sterling had meant a 20% drop in UK bookings, partially adjusted by a pick-up with US business. The swap of routes with partner airline Delta which gave Virgin Seattle and Detroit to the American carrier was a success, Kreeger said, noting that the Virgin brand was very much established in the Pacific Northwest.

This year is now set for Virgin with the airline completing delivery of its final and 17th Boeing B787-9. Next year will be a significant one, with the expected completion of an investment arrangement which leaves Delta holding 49% of Virgin Atlantic, 31% Air France-KLM and 20% Virgin Group. Delta has a 10% share of Air France-KLM.

Virgin will also take delivery of the first of 12 Airbus A350-1000s which could open up the holy grail of long-haul flights, London – Sydney nonstop, Sydney also being also served by Delta from the US. All Virgin’s four-engined aircraft will have gone by 2021. 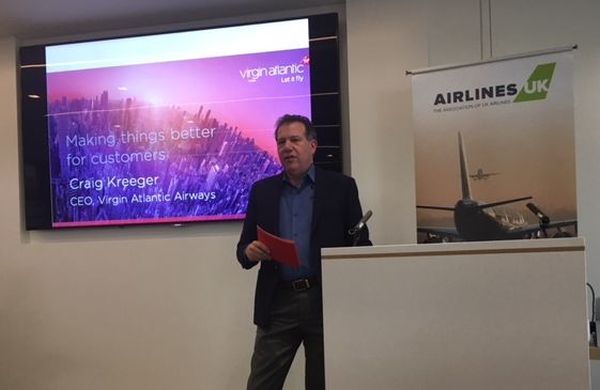