Lauda back in the air 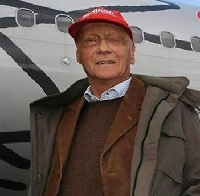 Airwise reported on Saturday that the airline will fly from Cologne, Düsseldorf, Frankfurt, Munich, Stuttgart, Vienna and Zurich with a fleet of 14 Airbus aircraft. Flights from Austria will start in June, the Vienna-based carrier said.

A company statement said Laudamotion had signed a cooperative sales initiative with German leisure airline Condor and the first few months would focus on partnership building and marketing the airline’s flights.

Confirming the contract of carriage agreement, Lauda said Condor would market his airline’s flights and handle selected operational functions including crew planning as a service provider.

Condor managing director Ralf Teckentrup said his company would be marketing Laudamotion “to fill a gap in the European market. Our customers will benefit from this by having a larger selection and low-priced starter offerings”.

Laudamotion will concentrate initially on destinations in Greece, Italy and Spain, with Palma de Mallorca served daily from Vienna and Salzburg, and flights from Graz, Innsbruck and Linz up to three times a week.

Santorini, Crete and Kalamata will also be available from the airline’s main base, Vienna.