In good news and bad news last week, Qatar Airways said it was returning to Gatwick after a seven-year absence, but warned it was set to report “a very large loss” for the current financial year following a blockade against it by neighbouring countries. 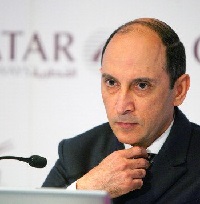 The new Gatwick service will see double-daily flights to and from Doha from 22 May using the Boeing B787 Dreamliner in partnership with British Airways. Qatar is also planning to launch flights from Cardiff in May.

Al Baker was speaking at ITB Berlin, where he also announced the financial news. The blockade, which he has called illegal, was "putting a lot of financial strain" on the airline, he said, with Qatar Airways required to fly longer routes and use widebody aircraft on routes previously operated with narrow-bodies in order to carry additional fuel.

This resulted in lower load factors and higher operational costs, both direct and fixed, he added, but although he expected to announce a large loss for the current financial year the airline was "financially robust".

Al Baker said Qatar Airways had continued to expand in difficult times and had been "challenging all odds", defeating its adversaries’ belief that the airline would have to shrink and park aircraft.