The chance of a new route between Germany and the south of Ireland has put Cork Airport on tenterhooks today (Monday 12 March) as it makes its case in a bidding war orchestrated by German low-cost carrier Eurowings. 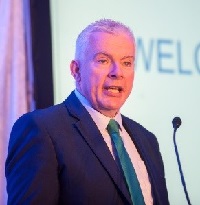 The airline has adopted an unusual approach to route development with a “You vote, we fly” campaign, with Cork competing against a shortlist of five other European airports to be the next destination.

Supporters have been voting for their airport and polls close today at 15:00 central European time with the result announced live in Eurowings’ Facebook page tomorrow at the same time. The destination with the most votes wins.

Cork Airport managing director Niall MacCarthy said: “To win would be a major boost to the region as well as the whole of Ireland and we’ve been urging everyone to take the time to vote for us over the past week. It’s a wonderful opportunity.”

It’s not the first time Eurowings has taken its network planning to a different level – last year, the Lufthansa subsidiary asked the public to decide a new route for its summer 2018 programme, with Mostar in Bosnia and Herzegovina the winner.