A “major milestone” for Europe’s largest infrastructure project has been hailed by Transport for London (TfL) and Crossrail Ltd after the first new Elizabeth Line train was tested in the tunnels through southeast London.

In an unrelated move Crossrail chief executive Andrew Wolstenholme has stepped down.

The line runs past the site of the old Silvertown for London City Airport station on the previous North London Line, but a high fence has been erected to ensure passengers cannot see the airport terminal. The nearest station for the airport is now Custom House, which is on a separate branch of the Docklands Light Railway (DLR).

The new train – built by Bombardier engineers in Derby – was the first to be driven from Abbey Wood. It entered the tunnels at Plumstead and travelled under the Thames heading for Connaught Tunnel before returning to Abbey Wood station.

Backers of the Elizabeth Line project say it is set to transform transport in London with quicker, easier and more accessible journeys when it launches in December. The tunnel test drive marks the start of the final stages of construction.

The train – which was driven at a low speed – is the first of hundreds of test runs that will take place throughout the year. 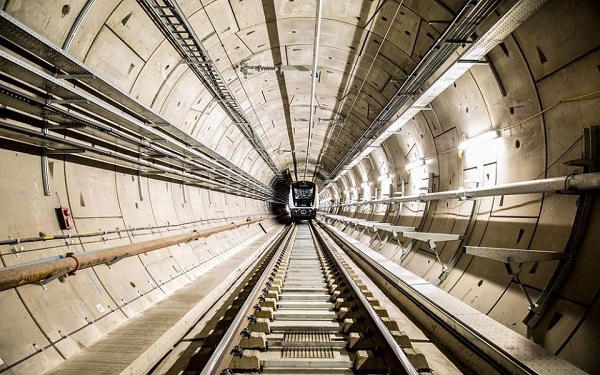