B787 inaugural for Shanghai

Plans are in hand at Shanghai Airlines for the inaugural flight in June of its 100th aircraft, a Boeing B787-9 Dreamliner with the registration B-1111. Four numbers in a row is considered a lucky symbol in China.

Initial reports suggest the aircraft will have 285 seats spread over four cabins, including four in First Class, 26 VantageXL+ models from Thompson Aero in Business, 28 Premium Economy seats and 227 in a 3+3+3 layout in Economy.

In a break with tradition, the airline is apparently dispensing with a partition between First and Business, with the four First Class seats – the VantageFirst model, also from Thompson Aero – essentially forming the first row of the premium cabin.

The carrier, a subsidiary of the China Eastern Airlines Group, is busy promoting the better-known aspects of the Dreamliner, including larger cabins, better lighting, the largest windows on a commercial aircraft and larger overhead luggage bin space.

It has yet to confirm the cabin layouts and the destination and flight time for the first service but it is thought the aircraft will operate on domestic routes initially, extending to Japan, Korea and Southeast Asia after that.

The Dreamliner is the first B787-9 for the China Eastern group as a whole, as well as being the 100th plane in the Shanghai Airlines fleet. 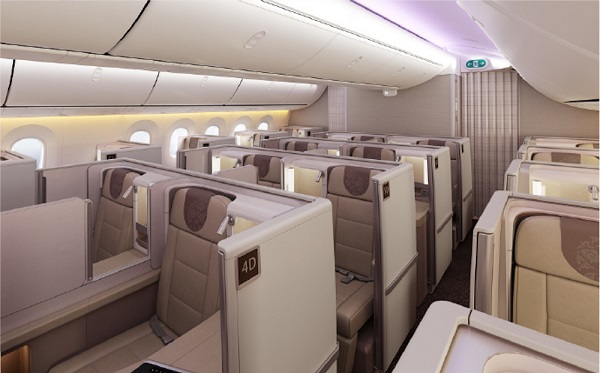