AND FINALLY: Alexander who?

In a goodwill gesture toward neighbouring Greece, Macedonia has renamed its main airport, which bore the name of the ancient warrior king Alexander the Great, as Skopje International. 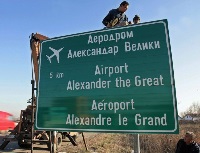 Macedonia’s previous government named it for Alexander in 2006 but the new administration is working with Greece to resolve a 25-year dispute over the Macedonia name, which Greece argues implies territorial claims to its Macedonia province, where Alexander was born.

The three-letter code SKP remains the same. These never change, regardless of the politics!