No-frills fares from British Airways and others across the Atlantic are on the way next month in a new attempt by mainline carriers to combat competition from growing numbers of low-cost airlines. 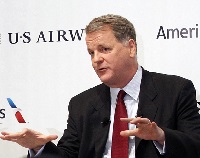 American Airlines is also joining the trend, along with Iberia and Finnair, in offering the unbundled rates, with passengers given the option of paying for “extras” such as checked baggage and choice of seat.

American Airlines chief executive Doug Parker said: “There is a large segment of the flying population who cares almost entirely about price, and we need to compete.”

The airlines say the new basic fares, which include carry-on luggage and one personal item, offer customers more choice. In-flight, the service will be the same as Economy, including meals or snacks, entertainment and blankets.

In a statement, the airlines said passengers wishing to select their seats and have checked baggage would find a better deal in a bundle.

Travel dates, routes and the fares, known as Standard on BA and Finnair, Main on American and Optima on Iberia, will be announced when the scheme is launched in April.

“COMFORT IS NOT A CLASS PRIVILEGE”.