Initial delivery plans for a new fleet of Bombardier CS300 aircraft for Egyptair have been announced by airline chairman and CEO Safwat Musallam, with the first due to arrive between November this year and next January. 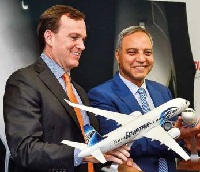 Egyptair has 12 firm and 12 optioned CS300s on order under a deal signed last November at the Dubai Air Show in what was seen widely as a much-needed expression of support for the Canadian manufacturer.

It came amid controversy over a threat by US authorities to impose crippling tariffs on Bombardier aircraft sold to US airlines and shortly after Airbus moved to alleviate the threat by agreeing to take a majority stake in the C Series programme.

The CS300s on firm order will be delivered up to the end of 2020 while delivery for the optioned aircraft will be between 2020 and 2026, Musallam said.

They are planned to replace a fleet of 12 Embraer EMB-170s operated by the Egyptair subsidiary Egyptair Express which are due to be phased out during this year and next.

Musallam also gave an update on plans for Egyptair to introduce the Boeing B787-9 Dreamliner, with the first due from the manufacturer in June next year. The airline is due to lease six from AerCap.