Dimitrios Gerogiannis, the engaging CEO of Greek airline Aegean was the speaker at London’s Aviation Club last week.  The MBA (Master of Business Administration) from the London Business School introduced himself by saying he preferred a dialog to a monolog which he would keep short in describing the airline, and then take questions. 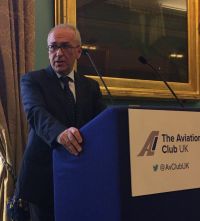 Aegean commenced operation in 1999, joined Star Alliance in 2010 and took over Olympic in 2013, retaining the name for domestic services.  Its success has been in spite of a 25% drop in GDP.

Today it operates 46 Airbus A320 series aircraft.  He confirmed that a fleet renewal programme would be announced “within three or four weeks”.  He said that in five years’ time the airline would have 75 aircraft, and that there were 25 routes, mainly to secondary airports, yet to be served from Athens.

Asked by BTN if it planned long-haul services Mr Gerogiannis was emphatic.  “No!”

What he did emphasise was the camaraderie of the staff.  “Our ethos is to believe in service and efficiency,” he said and kept saying. And yes he was worried when Ryanair tried to come in on a domestic route.  But Aegean weathered the storm.

Finally he was asked if Aegean was an acquiring or to be acquired airline.  The grinning Mr Gerogiannis responded: “Who knows!”