Bournemouth and the A340

European Aviation of the UK has signed an agreement to acquire ten Airbus A340 aircraft from Abu Dhabi-based Etihad Airways. 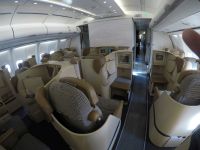 The aircraft, comprising seven A340-600 and three 500 series, will be delivered over the next few months, with the first two aircraft into Bournemouth Airport, the British charter expert’s home base.

European is no stranger to acquiring wide-body aircraft after purchasing a fleet of B747s from British Airways several years ago.

“The aircraft are without doubt the best A340s available on the market and the three-class interior is superb.  The extreme professionalism we have encountered during the negotiations has resulted in European entering into a bold and exciting new chapter in our history,” commented Trevor Whetter, European’s managing director.

Paul Stoddart, CEO of European, added: “The A340 is an outstanding long range aircraft and the 500 version is without doubt the best Head of State and VIP candidate aircraft on the market today with the 600 version capable of moving 350 plus passengers to most destinations non-stop.

This fleet, being only eight to ten years old, is in pristine condition and would be ideally suited as a flagship aircraft to most of the world’s airlines or potential start up”.