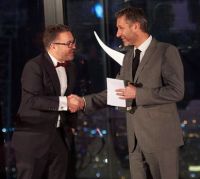 The excellent guest entertainer Adam Hills considers himself as part of the Qantas family, his retired father once a QF senior cabin steward.  “I know what is all about flying sub-load”, he said to an audience mainly from the travel trade. “And can I have a firm seat on the inaugural London – Perth?”  Good as he was whether he could keep all entertained for 17 hours is open to question.

All emphasis was on the new non-stop route which leaves London for the first time on 25 March.

Tourism Western Australia is heavily involved highlighting Perth as the perfect stopover destination for international visitors and connecting domestic customers.  The 9,000mi flight will be the first regular passenger service to directly link Australia with Europe.

European general manager Marcus Svensson hosted the evening. ““When Qantas created the Kangaroo Route to London in 1947, it took four days and nine stops. This is a game-changing route flown by a game-changing aircraft”.   He noted that from Australia’s many regional airports with a one stop London service some will now be routed via Perth.  The Qantas connecting hub is being moved from Dubai to Singapore to coincide with the new route startup.