Many readers will have known Mike Hooks, the distinguished aviation historian and journalist, who passed away on 17 January at the age of 89. 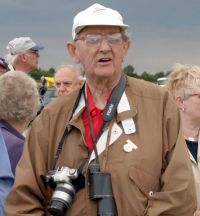 Mike’s enthusiasm for aviation started with plane spotting at Croydon Airport and he went on to work for many years as Press Relations Officer for the Society of British Aerospace Companies (SBAC), was Editor of Airports International magazine from 1967 to 1975 and edited Air-Britain’s house magazine, Air-Britain Digest from 1964 to 1973.  In recent times his encyclopaedic knowledge of all aspects of aviation made him a key part of the Aeroplane Monthly team.  He was the author of a number of aviation books including several titles for Tempus Publishing including the history of Croydon Airport and Junkers aircraft and co-wrote the well-known book "40 Years at Farnborough" with John Blake.

Mike was the ultimate aviation enthusiast and until well into his 80s, he could be found at aviation events all around Europe energetically walking around with notebook, binocular and camera.  He was the main contributor to “The Historic Collection” London City Airport – 30 Years Serving the Capital” (p70/71).

Mike will be greatly missed by the aviation community and our sincere condolences and best wishes go to his wife, Pam and son Lance.  ROD SIMPSON

Sad to read the news of Mike's passing. He was the ultimate in courteous press relations at SBAC and as an aviation historian he was in a global top echelon. We shall all miss his cheerful presence. SA