Qatar Airways has kicked off 2018 by introducing its innovative Qsuite on Washington DC flights, making the city the second US destination to offer the innovative new Business Class product. 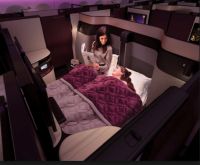 Qsuite features the industry’s first-ever double bed in Business Class and customisable private cabins for up to four people, setting a new standard in luxury travel.  The product was launched at ITB Berlin in March 2017 and first introduced on flights to Heathrow and Paris, recently making its highly-anticipated US debut at New York’s John F. Kennedy International Airport.

Qatar Airways was recognised for its launch of Qsuite by receiving the ‘Best Airline Innovation of the Year’ award at the 2017 ULTRAS (Ultimate Luxury Travel Related Awards) held in London last year.

Qatar Airways celebrated ten years of flying to the United States’ capital in 2017, with its first flight to Washington Dulles International Airport from Doha on 19 July 2007. In the past year, the airline has carried more than 185,000 passengers from Washington, DC to destinations across Asia, Africa, the Pacific, and the Middle East. Qatar connects to 13 destinations in India.