A further London route is likely as Cyprus start-up carrier Cobalt Air expands.  The airline already flies to Gatwick and has taken the former Cyprus Airways’ crown as the established Cypriot airline. Established in 2016 it now flies to 18 destinations. 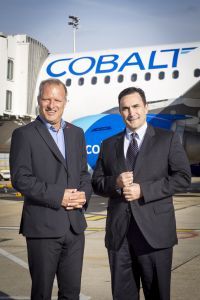 Cobalt Air carried 750,000 passengers in 2017, four times its first year’s business and is on course to increase to one million in 2018, CEO Andrew Madar forecasts.   It also introduced Business Class on selected routes at year-end (having remodelled two of its six Airbus A320/A319s).

The offering will be expanded to other European routes and its first Middle East destination, Abu Dhabi, which debuts 28 February, and the established Moscow flights.

Andrew says he is looking forward to announcing an ‘important’ new London route next month, for end of March start, as Cobalt continues on its path to ‘significantly improve connectivity’ through Cyprus.

Madar joined Cobalt Air a month after its launch in August 2016.  His CV includes Boeing and GE, where he worked for over 20 years, as well as Comac in China.