Michael O’Leary seems to have got is wrong again. 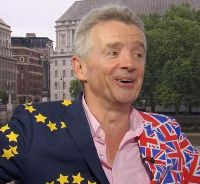 Following his climb-down in allowing some of his pilots to be represented by a trade union, and the disastrous crew rostering debacle, he now finds himself applying for a CAA Air Operator Certificate through a British registered Ryanair offshoot.

With the coming of Brexit he has been forced into joining Norwegian and Wizz as UK operators looked after by the UK government in terms of bilateral arrangements with other countries.  Typically, in a statement Ryanair says that only 2% of its business is domestic, but in truth at least 20% of the airline's services are from Britain to EU countries and in particular Ireland.  At one time Stansted represented over half of Ryanair’s total traffic.

In what is seen as another move away from the original Ryanair maxim of keeping it simple the airline is now heavily promoting its flight connection concentrating on Rome Fiumicino Airport where baggage will be transferred also.