Due to open in the first quarter of 2018 is The Murray, Hong Kong, a high-profile preservation project by British architect Foster + Partners. 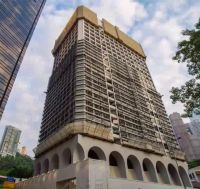 The hotel, part of Hong Kong’s Conserving Central Initiative, was previously the stand-alone Murray Building, one of the city's most iconic landmarks, sited at Hong Kong Island’s central business district near the Peak tram terminal.

A member of Global Hotel Alliance’s Ultratravel Collection, the US$1bn contemporary urban chic sanctuary will feature 336 rooms and suites spanning 25 floors. Other facilities include a rooftop bar with breath-taking views of the central business district and the green oasis of Hong Kong Park, a series of signature restaurants and bars, as well as creative meeting and event spaces.

The Murray is one of the eight historic landmarks under the Conserving Central initiative introduced by the HKSAR government in 2013.

Defined by its imposing three-storey arches and distinctive recessed windows, the building was designed by Ron Phillips in the 1960s and is recognised as a pioneering example of sustainable architecture. The tall white landmark structure won many awards for its ground-breaking and energy efficient design.

Phillips recently attended a plaque unveiling ceremony and the Murray will become the flagship property of Niccolo Hotels, which owns and operates an exclusive collection of luxury properties.