Following delivery of its first Airbus A350 XWB last November ‘oneworld’ carrier Malaysia Airlines will introduce the aircraft next Monday 15 January on its twice daily service between Heathrow and Kuala Lumper. 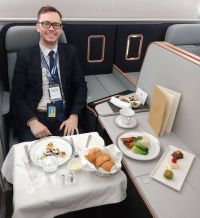 Malaysia Airlines Group CEO Izham Ismail, who originally joined the airline as a pilot in 1979, is expected to hold what is termed a “keynote speech” in the airline's highly rated Golden Lounge at Heathrow T4.

Malaysia’s A350s will feature four First Class seats, 31 Business Class seats, and 251 Economy seats. Notably, Malaysia Airlines becomes the first airline to offer a First Class cabin on the A350.  BTN  plans a FLYING AT FRONT END on the MH Airbus A350XWB in a forthcoming issue.