The Secretary of State for Transport, Rt Hon Chris Grayling MP, has confirmed that Byron Davies will be the Government’s first ever General Aviation Champion.

Mr Grayling made the announcement at the All-Party Parliamentary Group (APPG) on General Aviation Christmas Reception at the House of Commons. 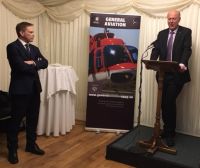 The term ‘general aviation – GA’ is not powerful enough to describe what is basically the engine room of commercial flyingsupplying all the engineers, pilots and support trades training.  It includes all aircraft under 12,500 lbs all up weight.

The announcement was welcomed as a sign that Government is at last giving GA and the serious issues facing the sector, the attention it deserves.

Byron Davies was the first Chair of the all-party group prior to the June 2017 General Election, following which Grant Shapps MP took over.  The group’s membership has expanded to an impressive 112 parliamentarians, including nine former Cabinet ministers, three former transport ministers, 15 privy councillors and one current party leader.

Mr Shapps said: “General Aviation is the glue that binds the entire aviation sector together. And for the very first time, we are being listened to in Government. I’m delighted that the Department for Transport not only understands that it is the sponsoring department for General Aviation, but is doing something practical to help with the appointment of Byron Davies as the first ever General Aviation Champion”.

One of the reasons that GA is thriving in the USA is because hangar homes are allowed on GA airfield, which not only helps to safeguard the airfield for operational flying, but also helps to make it more sustainable, as each contributes financially to the airfield operation. This is also the case in France and other European countries, but not yet in the UK, mainly because of local Councils not allowing hangar homes on GA airfields. Hopefully this will change and help to breathe new life into GA in the UK by following the proven model in the USA and the rest of Europe of allowing hangar homes on GA airfields. For more information on this concept please visit www.hangarhomes.co.uk