Blue passports for the British

British passports will change from burgundy to blue after Britain leaves the EU, the Home Office has said. 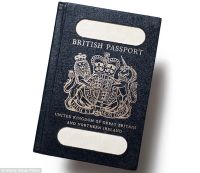 The new passports will be issued to those renewing or applying for a passport from October 2019.

Burgundy passports were first issued in 1988. The EU has never compelled the UK to change the colour of its passport. It was a recommendation.

The EU travel information and authorisation system (ETIAS) is modelled on the US ESTA scheme and could require British travellers to Europe to register in advance and make a small administrative payment.

He added: "In the 2016 referendum, we wanted our passports back. Now we've got them back!"

But Labour MP Mary Creagh tweeted: "No-one under 45 will have owned a blue passport, and most will think they're not worth £50bn and crashing the economy."

The picture of an old blue passport is misleading. The format of the passport will not change - it will be the same size as the EU one with all the same features, photos, embedded chip etc. because that's all governed by international (not EU) treaty and law. The only thing that will change is the colour and references to the EU which will be removed.

This will be great provided British airline will be allowed to fly anywhere once it happens.