Luton Airport held a press conference last week. Nothing wrong with that except that there was not a representative of the airport in sight. The gathering was hosted by London Luton Airport Ltd (LLAL), a company owned by Luton Council (see BTN 11 December). The local press were for the most part compliant and only Business Travel News  asked any questions after the 30min briefing. We were told an unnamed technical team was helping the council. 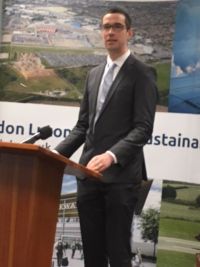 The airport is operated by a Franco/Spanish company which has a concession until 2031.

The council unveiled an (expensive) 28-page brochure showing its plans for the future. Called  Vision for Sustainable Growth 2020-2050, it said passenger capacity would go from 18m to 36-38mppa (million passengers per annum). No mention of where this expansion would come from, nor potential destinations.

Cllr Andy Malcolm, chair of LLAL and Luton Council’s portfolio holder for finance, said: “London Luton Airport is a huge success story. On the back of 44 consecutive months of passenger growth, it is the fifth largest and fastest-growing major airport in the UK, sustaining an estimated 33,000 jobs across the region, and contributing more than £1.5bn per year into the UK economy”.

At its present growth rate, Luton is due to reach the permitted capacity of 18mppa in 2021.