Regional & City Airports (RCA), the airports management division of the Rigby Group, has completed its fourth regional UK airport acquisition with the purchase from MAG of Bournemouth Airport. The sum involved was not disclosed.

The move was beset by rumours that MAG’s East Midlands Airport (EMA) was also for sale but a MAG spokesman denied this, saying: “We are not looking to sell EMA.”

RCA said the Bournemouth deal move underlined its intention of being a significant player in the regional market as it adds to a portfolio including Norwich, Exeter and Coventry airports and contracts to operate Solent, City of Derry and Blackpool.

Group chairman and founder Sir Peter Rigby said: “Not only does (the acquisition) expand our catchment to include the major regions of south England but focuses operations on a core market poorly serviced by the major aviation players.”

RCA chief executive Andrew Bell said: “Bournemouth Airport is already one of the south’s flagship aviation hubs and I look forward to working with staff and management as we continue to expand its operations and build on that success.”

MAG chief executive Charlie Cornish wished Bournemouth’s new owner well. “We are confident the airport will continue to flourish as we continue to focus on improving Manchester, Stansted and East Midlands airports," he added. 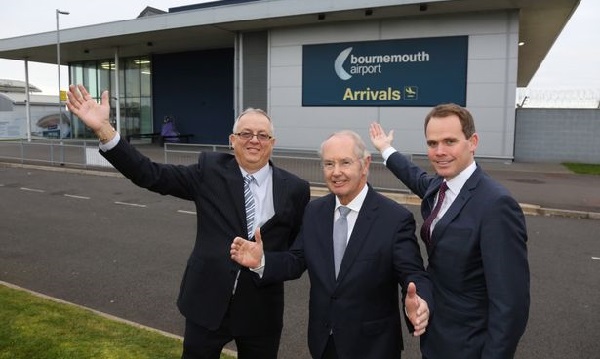 Look, over there... sitting on the bench, it's a passenger, maybe our only one today. ...Er,..Locked out it seems? Yes! Your'e right, Just arrived on the fill me up M&S Sandwich flight...Listen you lot We don't need new facilities or runways because our sandwiches here at Bournemouth are this big...undo the padlock and let them in...peregrine!