The only non-stop service between Taiwan and the UK touched down at Gatwick on Friday as Sky Team alliance member China Airlines completed a 13hr flight from Taipei’s Taoyuan International Airport with its new Airbus A350-900. 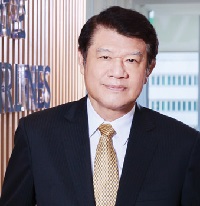 The arrival marked the carrier’s return to the UK after a five-year hiatus and was greeted by water cannons to mark the occasion. Airline chairman Nuan-Hsuan Ho said: “We’re delighted to be back”.

Gatwick chief commercial officer Guy Stephenson added: “Today represents the strengthening of the relationship between the UK and Taiwan and our commitment to investing in bringing accessible travel to even more British customers.”

The China Airlines A350-900 carries up to 306 passengers in a three-class configuration of Premium Business, Premium Economy and Economy. The initial flight schedule is for four departures a week from Gatwick’s South Terminal, increasing to five a week next March.

Of the increase, senior vice-president Europe Roger Han said: "Having only just announced our return to the UK, we are already demonstrating our ambition and commitment to the service by expanding from four to five weekly flights."

The airline is also boosting other European services from next March but reducing those on certain US and Australia routes.