Airbus has poached a Rolls-Royce executive to replace John Leahy as head of sales. Eric Schulz, currently president of the civil aerospace division at Rolls-Royce, will join his new company at the end of January. 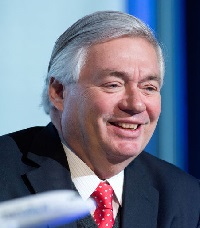 The 54-year-old French engineer will report to Airbus chief executive Tom Enders, who paid tribute to Leahy, 67, as a “living legend” who had overseen the sale of more than 16,000 jets and propelled Airbus from underdog to the industry’s top rung.

The appointment follows months of uncertainty over who would replace Leahy. Schulz, president of Rolls-Royce’s civil aerospace unit since January 2016, will join Airbus at a time observers noted it was struggling to continue Leahy’s legacy of record aircraft sales amid a rebound by arch-rival Boeing.

Schulz began his career at one of the founders of Airbus, France’s former state-owned Aerospatiale, before working at aerospace supplier Goodrich via jobs at two French airlines, UTA and Air Liberté.