The former head of Croatia Airlines, Krešimir Kučko, has been appointed CEO of Gulf Air with immediate effect. He replaces Maher Salman Al Musallam, who left earlier this year. 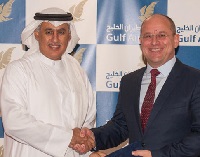 Gulf Air chairman Zayed Bin Rashid Alzayani said Kučko brought with him “exceptional industry knowledge that I am confident will add considerable value to our business”.

Kučko left Croatia Airlines last month after 25 years with the carrier. He was appointed president and CEO in 2012 and was credited while in the top job with restructuring the airline, which has been in profit for the past four years.

In contrast, Gulf Air has been loss-making for several years although Al Musallam, who stepped down from his position in June, reduced the airline’s debts by 88% during his time as CEO.

How many CEOs have Gulf Air had since James Hogan left in 2006? It's been a bit of a revolving door.