US affair with Cuba cools

The love affair between US carriers and Cuba faltered further last week when Alaska Airlines became the latest to announce it was cutting services. The company will terminate its daily Los Angeles – Havana schedule on 22 January. 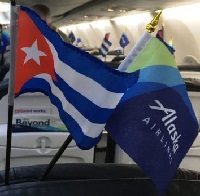 Nine US airlines launched flights to the island between the second half of 2016 and early this year after former president Obama signed a new air services agreement allowing commercial services between the US and Cuba for the first time in half a century.

President Trump, who opposed the Obama policy, earlier this year withdrew part of the agreement, known as “people-to-people travel, which allowed individuals to visit Cuba on approved trips.

Alaska has become the fourth to abandon the market following Silver Airways and Spirit Airlines, both based in Fort Lauderdale, and Frontier Airlines of Denver. Sun Country Airlines was given rights to fly but has said it is giving them up.

Other US carriers including American Airlines and Southwest Airlines have cut capacity to Cuba. Southwest said this summer it could no longer see “a clear path to sustainability” in the market.

Alaska, which launched the Los Angeles – Havana flight on 5 January this year, said it planned to redeploy aircraft used on the route to markets with higher demand.