A new service to between Dublin and Seattle as part of a 2018 summer schedule boasting 3.7m seats between the UK and Ireland and seamless connections to 13 North American destinations was announced last week by Aer Lingus. 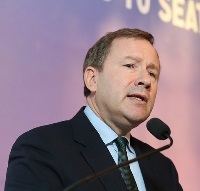 Ireland’s first ever direct service to Seattle, also known as the Emerald City, will operate four times a week from 18 May and offer direct connections from 12 UK centres including London, Birmingham, Manchester, Glasgow and Edinburgh.

The Aer Lingus summer 2018 short-haul schedule includes regional services operated by Stobart Air and involves a total of 25 routes between the UK and Ireland.

Mainline services connecting from London, Manchester and Birmingham will have an additional 41,000 seats while the total between London and Ireland, flying into Belfast, Dublin, Cork, Shannon and Knock, is 1.7m.

A feature of the Aer Lingus operation is the ability for passengers to clear US Customs and Immigration at Dublin Airport before boarding their flights.