Wizz moves in on Athens

More competition for Ryanair in Europe is on the way after Hungarian carrier Wizz Air announced it will begin serving Athens from the start of next summer with eight routes to the Greek capital. 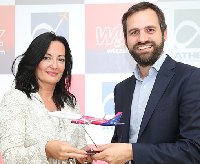 CCO George Michalopoulos said: “It is undeniable that Athens has been one of our most requested destinations for a number of years. Our new services and low fares will create opportunities for Greek customers to visit Central and Eastern Europe while also stimulating inbound tourism and business links.

“We look forward to starting a fruitful partnership with Athens Airport and remain committed to bringing even more opportunities in the future.”

Ryanair, which claims to be Europe’s largest airline, already serves Bucharest, Budapest and Sofia from Athens, while it has confirmed it will also serve Katowice this winter Vilnius from next summer and Katowice.