A new airline has touched down at Stansted with the arrival of Greek carrier Air Mediterranean’s inaugural flight from Athens. It is the carrier’s first UK scheduled destination and is operating up to four times a week using the Boeing B737.

Entertainers in ancient Greek costume along with representatives from the airport welcomed the first flight to Stansted on Thursday by handing out cupcakes to passengers as they arrived.

Stansted aviation director Mats Sigurdson said: “We are thrilled to welcome Air Mediterranean to Stansted as they launch their first UK services. This is great news and adds even more choice of airline to the already extensive European network on offer at the airport.”

Air Mediterranean owner George Hallak said: “We are delighted to be launching our first scheduled services from Athens and expect the routes to be a remarkable success.”

Convenient flight times from Stansted would also enable passengers to take advantage of Air Mediterranean’s onward connections via Athens to the Middle East and Africa, he added. 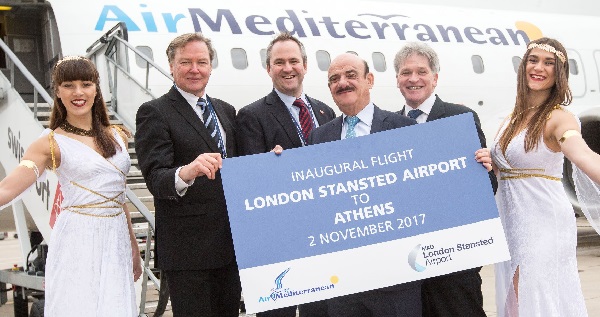