Post-Brexit developments and other major challenges confronting the UK will come under the microscope at the Aviation Club monthly lunch on Wednesday week, 8 November, when IATA director-general Alexandre de Juniac addresses the audience. 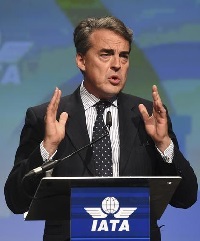 Recent events including the CAA mounting its biggest peacetime repatriation of millions of passengers following the Monarch collapse and Ryanair’s mass flight cancellations are just part of the background against which he will be commenting.

De Juniac became the seventh person to lead the International Air Transport Association when he took on the role of director-general and CEO from 1 September 2016.

His qualifications cover almost three decades of experience in both the private and public sectors, including senior positions in the airline and aerospace industries and the French government.

The November lunch is the penultimate gathering for 2017; the year will be concluded with the pre-Christmas event on 6 December, when the guest speaker will be British Airways chairman and CEO Alex Cruz.