A new route between Paphos and Moscow is being launched next Sunday, 29 October, by Cypriot airline Cobalt Air as part of its winter 2017 schedule. The carrier will serve the route twice a week, on Thursdays and Sundays. 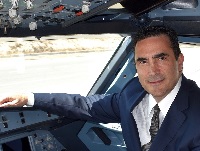 The launch is part of an expansion of its international network by the fledgling company, which last week was named by global airline research specialist CAPA as its Airline Start-Up of the Year.

Cobalt, based at Larnaca International Airport in Cyprus, operated its first commercial flight on 7 July 2016 from Larnaca to Athens. It is the second Cypriot airline, after Tus Airways, set up since the dissolution of Cyprus Airways in 2015.

It connects Cyprus via Larnaca and Paphos airports on high-frequency, value-fare services to major business and leisure centres including Stansted and Gatwick daily, Athens daily and Frankfurt.

CEO Andrew Madar said: “We are pleased to expand our routes for winter 2017 by launching services between Paphos and Moscow Sheremetyevo Airport as part of our programme to grow our international route network.”

CAPA executive chairman Peter Harbison said: “To replace a strong brand such as Cyprus Airways and build up an operation is no easy feat, but in just over a year Cobalt Air has done that.”