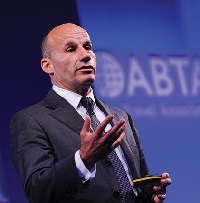 The Monarch failure showed the system of customer protection had a gaping hole and people’s understanding of the ATOL scheme had been “blurred” by the myriad ways in which travel arrangements were now assembled.

The new Package Travel Directive due to be introduced next July, contained elements that no-one yet fully understood, Tanzer went on, adding to the “complicated picture”.

He said the CAA needed to be more transparent in its communications to ease confusion about the meaning of “ATOL protection”, which did not apply to a company but to a particular set of holiday arrangements.

A second point to be addressed was the situation regarding passengers who simply purchased a flight as a scheduled airline ticket, for whom there was no repatriation scheme.

The government nevertheless decided it would repatriate everyone free and try to recoup what it could from ATOL holders and credit card companies, who were not consulted and had no say in the cost incurred.

“This is completely unsatisfactory,” Tanzer said. “The taxpayer will end up picking up a large bill, whatever happens, and the industry is left wondering what is the point of ATOL protection if everyone gets brought home anyway?