Government-owned South African Airlines could be wound up or sold, according to Johannesburg’s  BusinessDay, the local and much respected equivalent of London’s  Financial Times. 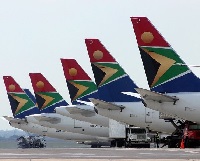 Friday’s story was headlined “SAA left in limbo as Telkon (the nationalised local version of British Telecom) sale is canned”, saying South Africa’s government had needed money to bail out the airline and was thought to want to use the Telkon disposal for funding.

The previous day, respected columnist Bronwyn Nortje wrote a major feature “Why nosediving SAA no longer merits costly emergency landing”, pointing out the huge bailouts the airline has needed since 1999.

It said the airline did not know how to deal with the Gulf airlines which now bypass the traditional Africa hub, Johannesburg, with Emirates serving 25 African destinations with a very good product and Turkish Airlines serving 45.

Nortje noted SAA was advertising for a chief restructuring officer to turn the airline around.

“I don’t want to be a killjoy, but you don’t need a restructuring expert to know why SAA doesn’t make any money and is not likely to make any money,” she added. “The job should be to sell the assets, settle the debts and shut it down. We can do without SAA”.

I believe there is definitely a space in the market for SAA but yes perhaps privatisation would be the answer, allow to compete domestically with the LCCs? This would also help suppor the regional African routes whilst they could streamline their international operations greatly. But of course this would all come with a huge bill and would require a total transformation from top down.

Privatisation is what the public says it wants. Who will fly the "thin" routes? Cities like East London and Kimberley will find themselves out in the cold without daily flights to JNB.