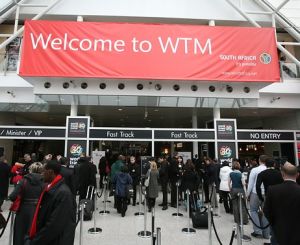 In spite of the gloom enveloping the world’s airlines, especially the less efficient ones, World Travel Market (WTM) has successfully taken place for the 30th time, with people seriously talking about “green shoots”.

Once again the DLR “played up” with a train breaking down at Bank station during the peak period of the first day (Monday) causing problems but to be fair to Transport for London they did have many more operatives around than in previous years, their technique for getting people into the carriages worthy of Tokyo.  It was also apparent that most of the platform extensions along the line are now nearly complete allowing for a 50% increase in capacity, due to be implemented shortly.  The new line from Canning Town to Stratford International, the 2012 Olympic site, is clearly nearly complete. 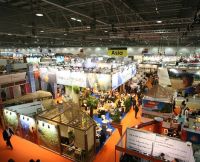 In truth WTM is now more of a leisure travel fair than a “not to be missed” business travel opportunity.  The halls were full with both stands and people but for the most part the major airlines gave it a miss.  Some 40 carriers were listed but rather than exhibiting on their own they mostly formed part of a National stand, typified by Kingfisher,  part of the Indian Tourist Board consortium.  On display was a Formula One car and beer was in full supply too!

London Mayor Boris Johnson opened WTN by highlighting how tourism and travel can bring people together in shared appreciation and understanding.  In reference to the Olympic Games, Johnson stated that he was optimistic about the impact of the Games and wants to use the £9.3bn investment to boost bits of London which have been neglected for ages.  He also brought attention to the benefits of tourism, saying that it would not be short term but will benefit the city for years to come, with the enormous infrastructure project being the biggest change to London’s infrastructure in over 70 years. 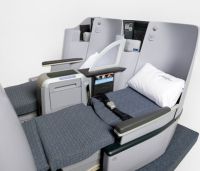 By far the most important airline event was the unveiling of Continental’s BusinessFirst flat seat module with Senior Vice President (Sales) Dave Hilfman coming over specially from Houston for the event.  It is a very well thought out unit, perhaps not as extravagant as some of the offerings from the Middle East carriers, but clearly very efficient in offering all that is needed on long haul overnight flights.  The seats could well be seen on the airline’s regional 757 routes out of Newark to Birmingham, Bristol, Manchester, Edinburgh and Glasgow before it is fully implemented at Heathrow and the 777.

Continental emphasised that the very recent joining of Star Alliance was already having an effect with the airline probably announcing a fourth Heathrow – Newark frequency for next summer.  The move from Gatwick to Heathrow had been a big success.

With Emirates and Etihad again with massive stands Oman Air’s more modest offering showed a very well thought out Business Class seat, one which many carriers would have been proud of in First.

Parallel to the show is always a whole series of travel related seminars held in the labyrinth of rooms that is all part of the Excel complex. 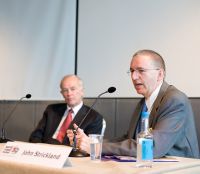 However the star of the week was Tim Clark, a resident of Dubai for 24 years and President of Emirates Airline.  His theme was that air carriers must develop new routes in emerging economies if they want to survive.  “Africa is an enormously powerful and potentially very strong continent.  The Chinese influence in Africa is more obvious,” he explained to a packed audience.  “As we started to connect these points, people started to flow in ways that we had not seen before.  More fool those who do not harness what is going on, including the European carriers.”

Clark warned that those who were “disingenuous” about Dubai’s growth – particularly the UK press – “do so at their own peril.”

“It is an open economy and suffered in the recession.  We have taken stock and slowed down but watch this space very carefully,” he explained.  As well as its key geographical location and hub operation, Emirates’ results have been boosted by a programme of cost cuts and lower fuel prices.

Clark said Emirates will close the financial year significantly up on previous profit forecasts, thanks to the quality of its brand, a fall in the oil price and favourable exchange rates.

Seat factors remain “in the 80% region” albeit with a lower yield per seat and the carrier has taken 16% off its unit costs, thanks to a recruitment freeze and efficiency drive.

He also questioned the value of airline alliances and warned that the recession should not be a “smokescreen” that allows consolidation and anti-trust immunity to be granted to rival airlines.

Another welcome guest at a session was Emirsyah Satar, President and CEO, of Garuda Indonesia, who seems to be well on the way towards turning around a once “basket case” into a top class airline.  Already planning to re-introduce a Jakarta – Amsterdam service he spoke of safety approvals restored, and fleet renewals with Airbus A330, Boeing 737-800 and 777.  He wants to improve the product and says with the Indonesian economy looking up all the targets should be achieved.  As he pointed out Indonesia has a population 240m making it it is the world's fourth most populous country.

In another session Caroline Bremner, Head of Travel and Tourism Research at Euromonitor International, said Low Cost Carriers (LCC) accounted for 22% of the market in 2008 but that would rise to 25.4% in 2010.  Strickland pointed out that with certain European markets the LCC penetration was even higher, reaching 35-40%, although he pointed out that in the case of BA it was boosting load factors by taking out capacity from its fleet.

“Legacy carriers are seeing a structural shift because of the loss of their most profitable passengers paying premium fares – these have declined about 14-15%,” he said. 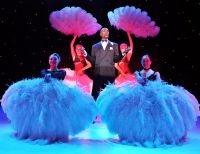 WTM took place prior to the BA/Iberia announcement and therefore, whilst noted at the time, the lack of appearance by Willie Walsh can be forgiven.  Perhaps not so BA itself although very senior individuals from the airline were noted looking around.  Walsh did appear in video recorded during the what was termed “The Global Economic Forum” noting “The turmoil in the financial services had a direct impact on numbers in our premium cabins.”  Hardly mind boggling news.  The BA vote by cabin crew today (16 November) over strike action regarding pay and conditions was a topic much discussed.  Would passengers look elsewhere for their pre-Christmas travel. www.wtmlondon.com