Another world first was claimed by Qatar Airways last week as it unveiled double beds in Business Class on its daily Boeing B777 flights between Heathrow and Doha.

It follows the introduction by the airline of the QSuite (BTN  13 March), which features privacy panels that stow away, allowing passengers in adjoining seats to create their own private room.

Qatar has now put the concept into operation, with passengers able to create double beds by removing the privacy screen. The space can also be used by families, as well as for business meetings, and as an area to socialise.

The airline says it now plans to roll out QSuite, described by senior vice-president Europe Jonathan Harding as “a First Class product in Business Class”, across the whole Business Class fleet, with flights to Paris and New York next on the timetable.

Support for the airline’s enthusiasm came from aviation analyst Alex Macheras, who described the QSuite seats as “the best Business Class in the skies today” and praised the “very comfortable bed, beautiful on-board decor and furnishings”. 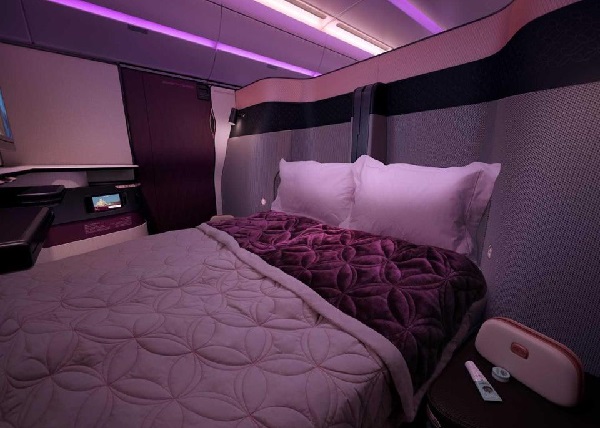 ...Ryanair Pilots Potential New Contracts Could Specify A Simple Rest Area...O'Leary's Appreciation Of The Hard Working Status Of Pilots,He Has Put The Above Design Forward For Approval.