During July 2017, 90% of the top 20 most in-demand flights on earth were in the Asia-Pacific region new research by Routesonline has found, with no routes from Europe or the Americas making the list.

The busiest flight in the world during the month was Jeju International (CJU) – Seoul Gimpo International (GMP), a service that links the largest island off the coast of the Korean Peninsula with the capital city of South Korea.

In total, there were 5,858 flights between Jeju International – Seoul Gimpo International in July 2017, equivalent to an average of 189 per day. Next up was Sapporo New Chitose – Tokyo International (Haneda) at 688,394 followed by Sydney – Melbourne with 663,037.

Established in 1995, with an assembly at Cannes, Routes is based at Manchester, England and is part of the London Stock Exchange listed UBM Group.  Its various events around the world make it the largest forum between airlines and airports. 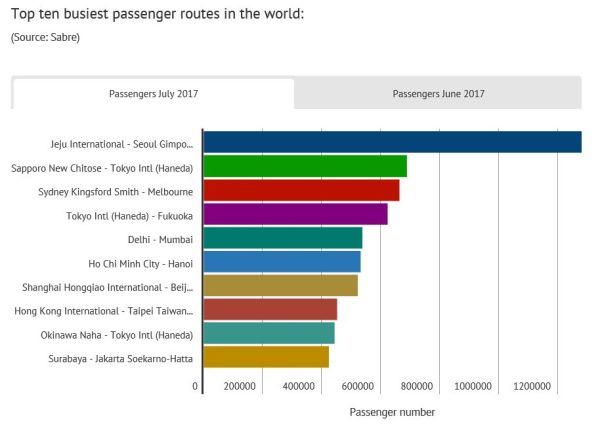