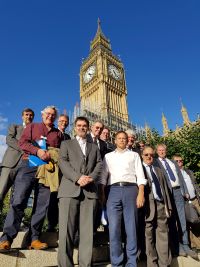 Only created in March this year, and already including 33 members of both Commons and Lords, the plan is to promote the objective via Parliament – as set out by British Government – of making the United Kingdom the best country in the world for General Aviation (GA), and to stimulate interest in the sector.

Supported by amongst others British Airways, Rolls-Royce and GA supplier Haywards Aviation, APPG sets its goal to ensure that GA inspires both current and future generations to take up science, technology, engineering and mathematics, thereby creating high-tech jobs and growth in all nations and regions of our economy. In order to achieve this objective, APPG believes that a network of General Aviation airfields must be protected and enhanced by the government.

During the meeting it was announced that Blackpool Airport had been purchased by the local council, who view an airport essential in attracting business Progress was being made on reopening Plymouth City Airport, and  in his own backyard (he is the local MP) Mr Shapps was able to elaborate on Panshanger, in his own constituency, which could be resurrected as a flying field in the not too distant future.

In my view the creation of the All-Party Parliamentary Group on General Aviation is a real boost for GA in this country, and will be a turning point for the better.