ON TOUR: Pardubice and East Bohemia

Just over a week ago Ryanair introduced a three times per week service between Stansted (see BTN 11 September) and Pardubice in the Czech Republic, 60 miles to the west of Prague.  The omens look fine for the route with good loads reported on the first scheduled service into the former military airport. BTN joined a small press group sponsored by the local tourist board and the airline. 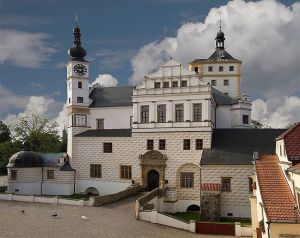 Pardubice is the regional capital in what is termed East Bohemia.  Research by BTN finds no link between East Bohemia and the term Bohemian which seems to have appeared in Paris in the early 19th century.

Up to the end of World War I all was part of the Austro-Hungarian Empire, and then an independent democratic country until occupation by Germany in 1939.  It became a one-party communist state under Soviet influence in the aftermath of hostilities.  If BTN’s visit is anything to go by it is seemingly a reasonably prosperous nation now, part of the EU, but with its own currency, and spotlessly clean.  Unlike parts of western Europe English is little spoken and this can be sometimes a struggle. Restaurant prices are for the most part less than half of the equivalent in the UK, and hotels about one third. 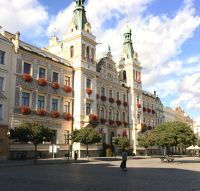 Our home for three nights was Hotel100, an excellently located boutique property, with good wi-fi and a delightful patio garden for breakfast and dining.  Recommended.

The city of Pardubice has a population of 100,000 and is dominated by castle-cum-chateau which dates from the 13th century. It underwent numerous reconstructions.

The most significant took place at the end of the 15th century and beginning of the 16th century with the original castle transformed into a palace. A new, massive fortress was built around it. Thus, a combination of a castle and chateau was created. No building of this type has been preserved to this extent in Central Europe. The chateau is now the residence of the Museum of East Bohemia in Pardubice and part of the area is also used by the Gallery of East Bohemia.  The park around the grounds is delightful and under the massive walls, and cleverly designed to fit into the local architecture, bomb shelters dating from Soviet times. 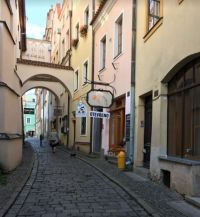 It is now possible to take a pleasant walk and at the same time, learn about new things in Pardubice thanks to the Vilém of Pernštejn Trail named after an historical leader. The total length of this trail with 15 stops and information boards is 2.5km and it can be walked in one hour.  There are plenty of places to sit and perhaps refresh yourself, for example at Tyršova Park, at Pernštýnsky Square or Republik Square. These are the places where you can learn about various interesting facts and thus familiarise yourself with the centre of Pardubice.  The East Bohemian Theatre has a 500-seat capacity and dates from 1909.  It presents a cross-section of productions, future events include Kiss Me Kate, a play about Rasputin, Othello and another billed as Chaplin.  Plus orchestral pieces.

Brewing is a centuries old tradition in Pardubice dating back to 1491 with the Porter beer not unlike Guinness. A visit to the brewery is recommended.

The National Stud at Kladruby nad Labem is one of the oldest studs in the world and home to the oldest original Czech horse breed – the Old Kladruber horse. It covers an area of over 3,000 acres.  For over 300 years (1579–1918) it was an imperial court stud providing horses for the royal and imperial court in Prague and Vienna.

Nowadays the National Stud keeps around 500 horses. The historic site of kladruby nad Labem breeds 250 grey Old Kladrubers and 250 black Old Kladrubers are bred in Slatiňany, a former stud of the princely family of Auersperg.

The main stable complex includes a series of buildings, homes for the breeding stallions, loose stables for broodmares, ones for young horses in training and a riding hall. Next door what is termed The Imperial Castle, really a chateau, which features a number of rooms where the Hapsburg nobility stayed when they visited the stud. From the main courtyard, a two-mile-long avenue of lime trees runs straight across the pastures to the stables at Františkov, where weaned foals are reared from six months to three-and-a-half years of age. The whole site is a peaceful, excellently balanced cultural landscape filled with pastures, age-old avenues, irrigation channels, woods, tributaries of the Elbe and old farm  buildings. Take a carriage ride. It is well worth it.

The Old Kladruber horses are still the pivot of the life in the stud. Historically, the grey horses were used for ceremonial service at the imperial court. In fact, they are probably the only horse breed in the world bred specifically to pull coaches of the sovereigns. Nowadays the grey Old Kladrubers still serve at royal courts. The Danish Queen Margrethe II uses a team of six Old Kladruber greys to draw her State Coach on festive rides in Copenhagen. In Sweden, the Old Kladrubers carry the trumpeters of the Swedish Mounted Royal Guards. In the Czech Republic the horses are often seen at various celebrations at Prague Castle.

In 2015 an extensive two-year restoration of the Stud was successfully completed, and most of the site regained its splendid early 19th century look. Seventeen main historic buildings were renovated, new expositions created and opened to the public. season.

It calls itself ‘a modern historical town’ and that is probably the best description of  Litomysl a UNESCO World Heritage Site dominated by a richly decorated renaissance castle-cum-chateau with the medieval centre full of colourful town houses. It is home to one of the oldest chateau theatres in Europe.

In the vaults of the castle is a permanent exhibition of sculptures by Olbram Zoubek, a leading Czech designer who passed away this year.  Its basement is also a wine cellar. 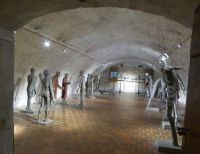 Visit Litomyšl at the end of June and start of July. At this time of the year the city pays homage to its most famous native, the composer Bedřich Smetana, by holding the Smetana’s Litomyšl opera festival.

Concerts are held in the chateau courtyard with its superb acoustics, in the middle of enchanting arcades of sgrafitto-decorated walls, and are an unforgettable experience.

His birthplace is open all year round.

Just outside Pardubice is Kunětická Hora Castle which looks old but was the subject of a major restoration completed in 1996.

Dating from the 1400s during the Thirty Years' War, in the early 17th century, the castle was besieged several times, eventually Swedish troops burning it to the ground.

The castle remained a ruin until the early 20th century, when the Pardubice Museum Society was formed. The group purchased the site in 1919 and began reconstruction in 1923 but with World War II and the Soviet era the rebuilding was not completed until 1996.

Today the castle is open to the public as a museum. On display are surviving murals, including a 1523 work depicting Samson and Delilah, the oldest known Renaissance mural in Bohemia. The castle also hosts occasional music and theatrical performances.

Sitting just below the castle is the Golf Club Kuneticka Hora, lush parkland with a lake at one side, 18 holes par 72 and about 6,800 yards long. 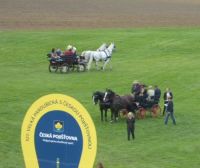 It may not be Ascot, although many of the ladies dress in their finery and wear outlandish hats.  The Great Pardubice Steeplechase has been running since 1874.  The course is just outside the city in a parkland setting with the race itself 6.1km long with 31 obstacles.  It was modelled on Liverpool’s Grand National.

The Ryanair press group were there as VIPs, luncheoning in one of the hospitality lounges overlooking the course, and between the supporting races taken for a carriage ride around the course.

Our visit was for one of the four elimination events.  The race itself takes place on Sunday 8 October.  Horse race fan Michael O’Leary should attend.

www.czechtourism.com  This site covers most of the places mentioned.
www.hotel100.cz/en

Ouch! Bohemia was an independent and powerful Kingdom between the 9th and 13th century. Today, it is one of the two states/provinces of the Czech Republic, the other being Moravia. It was heavily inhabited by Germans for centuries and a key flashpoint that led to WW2. Why unconvential, louche and pseudo-arty types called themselves Bohemian in the last century is best answered by them.

Nice article, given I live less than an hours drive from Pardubice I was very interested to read this. It would be nice to see Pardubice and the surrounds seen as a destination in its own right as opposed to a back door to Prague as mentioned last week. With Ryanair already flying twice daily to Prague hopefully this will be the case.